Blåst Film is situated on the North West Coast of Norway. Run by the brothers Are & Sturla, Blåst Film produces documentaries in the crossing between biology, anthropology and exciting storytelling.

«In 1992, when we were 10 and 15 years old, we talked our parents into skipping all other christmas gifts, instead buying a Panasonic VHS videocamera for the whole family. We made a lot of short films the following year, and almost twenty years later we met back home at our parents place to form what today is known as Blåst Film».

‘Blåst’, a blast of wind or air, and the Whales spout. Spout shapes differ among species, which facilitates identification. Our identify is shaped by the fresh air, steep mountains and the storms often coming by our small hometown. 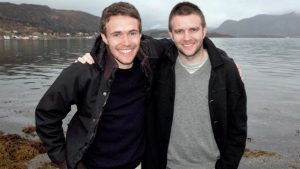 Would you like to screen one of our films?
Or maybe you just would like to invite us to have a talk? Or some other reasons?
For any requests – Please write us at post(at)blaastfilm.no

Manage Cookie Consent
To provide the best experiences, we use technologies like cookies to store and/or access device information. Consenting to these technologies will allow us to process data such as browsing behavior or unique IDs on this site. Not consenting or withdrawing consent, may adversely affect certain features and functions.
Administrer alternativer Manage services Administrer leverandører Les mer om disse formålene
View preferences
{title} {title} {title}